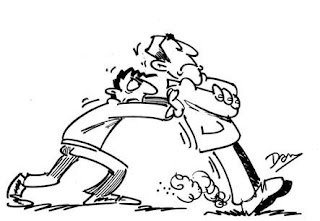 You won’t find very many disagreeing with the universality of the statement – “Change is the only constant and, yet, there is only a handful changing for real. How can a virtue which has such paramount acceptance have such abysmal application? Well, for starters, let’s just say, all of us have lied at some point in our otherwise moral lives knowing well that we should not lie. So, knowing has never been enough. Expressions of “change” & need to constantly “transform” are in common knowledge, people who profess change are also in no way a minority facing extinction, if reports on power distribution within society are true, then the advocates of change are also those who veil decent share of control. In most cases, they have both stage and the stature and yet change remains undone. Why? We can analyse it from various angles, from historical, anthropological, psychological, societal, economical to even aspirational ; just about any and every discipline that you can think of will present to you the part of the puzzle that you’re looking for to complete your understanding of what comes in the way of realising change. Anthropological and Psychological routes are perhaps the most appropriate streams of exploration of any discipline that has any bearing on humans, for two reasons, both of these lines of argument cover behavioural make-up and Anthropology in its purest form is a study of evidence, evidence, as you know is only a thing from the past; the present has substance and that is all it has got. So, I shall try and stick to the chosen streams.

You can base every human advancement on this theory. We began inventing and discovering to find ways to make whatever we were doing the hard-way, easy! In fact, each one of us at all times keep searching for ways to do stuff that we have to do quickly with lesser “effort”. Smart humans dressed in boring boardroom attire call it, the quest for efficiency. It is mere public posturing; the real driver for these changes lies in the fact that humans have always craved for the state of rest. Even those who have empty calendars, silent phones, no computers and no one to call their own, when asked, would effortlessly say; they’d like peaceful rest. We do not like moving, we do it, only when it becomes absolutely necessary. Thankfully, we are also intelligent beings, capable of both imagination and computation. We started as hunters and then when we realised that gathering would mean some rest from constant hunting, we made storage a practice. Thus was formed the first ever plan of the planet earth. We invented sharing, selection, storage; all with the sole objective of saving effort, in other words, to remain lazy. Arduous is not a romantic idea. Let’s take a few modern examples: Automation, what according to you forms the core of it? Things must happen on their own without we having to move a feather, isn’t it? What is ‘intuitive’; next logical and most probable thing coming to the fore without we having to choose from the gamut of options available, investing effort. Thanks to mother nature & biological needs we are forced to step out of our perpetual slumber and because with being lazy we’re also people who lack discipline, we tend to not follow exactly how we achieved outcomes last time and in our excursions, we sometimes accidentally discover, gold, a way to do things better by some margin and then shift to it. At this point, the thought that I’m sharing useless details must have started taking shape in your mind, before it consumes you completely, let me list a few accidental discoveries that have changed the course of human civilisation so that you see the merit of the argument in some perspective.

Research & read about these, you’d understand the point that I’m trying to make, here!

Humans are also the most scared species.

The human race can attribute its survival to the fact that we are fearful; our minds are wired to smell danger, we also come designed with system to respond to threats naturally, almost unthinkably, our physical ability and core bodily strength is nothing when compared with mighty species who have also evolved on our planet and yet we have managed to avoid total confrontation with them. We have the most advanced system to detect the smallest of the fulminations and we innately respond in one of the three ways.

1st and 3rd are the most popular responses but success actually comes from the 2nd option, that is to fight. Before we engage we wish to be absolutely sure, for instance, we do not proceed when it’s dark unless we have company; what we’re looking for is an assurance of favourable outcome. When most difficult situations surface, we freeze, do not act, let the opportunity pass or simply get scared and run away. In both of these responses, we do create for ourselves a false sense of safety to feel secure, Imagine, if every one of us chickened out, would we have grown? The answer is simple and straightforward NO. Thankfully, there are some, who stay and fight, they face up. And these, my friends are those who create history. Rest of the world simply follows. That is the reason why there are only a few successes but an awful lot of failures that lurk around on the planet. A select few who knew to fight created Andriod and the balance 2.5 billion of us use it in the sense of safety of comfort.  iPhone was a vision of one man who knew to not freeze, he who did not like fleeing, all he knew was fighting and thus arrived a piece of tech that changed the face of technology irreversibly. A select few created Grammarly and others simply use them to appear correct.

There you have it; “Aversion to labour and Fear are the strongest impediments to change.

Change requires courage, commitment, obstinate desire to be something better, each day & fearlessness. Comfort zones have to be shattered, old games in which you may have become pros have to be forgotten in search of newer and most importantly challenging opportunity. The thing to note is that there are 7.5 billions of us on this planet if we do not change, someone will and we will then be left to follow if we are lucky and if things go south we may not even exist; as some changes wipe old arrangements out, comprehensively. Much like typewriters lost to computers and computers are now loosing to small screens. The wheel of progress knows only to roll forward, it is upon you to elect to use it to ride with it or let it roll over you. From Edison to Steve Jobs to modern day’s hero (s) Mark or Elon; they have all toiled hard, did not run away from putting in the effort for they took upon themselves the responsibility to change the way the rest of the mankind conducts their daily lives.

Therefore, the questions that we must all ask ourselves each day are:

Keep asking these questions until you get the answer that compels you to not care about gathering and sets you free and puts you back to hunting.

In hunting for the unknown lies the glory.

On that note .. I will leave you to enjoy your Sunday evening!