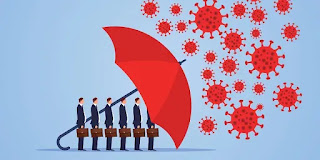 We’re in confusing times, making choices have never been more taxing, as a result, more often than not, we find ourselves attaching the cart before the horse. Humans have never quite known the future when I say this I discount the audacious claims that the astrologers make. We have, however, mastered the art of basing our predictions of the future on a combination of historical performance and present prevailing conditions. Even when the output of our models does not meet the realm of reality with a degree of accuracy enough to make us proud. We take comfort in the consistency of the present. We have a natural talent for neutralizing things, at least in our imaginative and somewhat delusional minds and that makes for a tranquil compromise between the actual and the desired.

COVID-19 has shattered that peace brutally and perhaps also irreversibly. Not only is our current condition unpredictably unstable but our faith in the history of human triumph has also been shaken curtly, by it. To cope with the tragedy, depending on the mental make-up, some of us are doing the wise thing of picking up books that have a detailed account of human response to comparable tragedies in the past. There are also those who prefer inferior in quality but a quicker way of gaining some insight, however superficial it might be – Google searches/Youtube and whatnot. Everybody is looking to find inspiration for a workable solution to the grand mess. Information overdose is not helping the situation, either. Let’s take a moment to analyze the visuals that surround us today: What are we consuming these days?
1) Stories on the growing number of infected.
2) Mounting deaths.
3) Painful tales of human tragedies.
4) Unprecedented economic damage.
5) Wage cuts.
6) Loss of livelihood.
7) A slew of bankruptcy petitions.
8) Shortcomings of the government.
9 ) The apathy of society, particularly the rich and the privileged who even at this tragic time has not stopped their vulgar and foolish show of wealth.
These are indeed disturbing developments and none of them are either fictitious or rooted in propaganda to paddle a frightening narrative forward. Death and every other form of destruction are indeed common in 2020.

“So long as we’re alive we will have to hustle”, I’d like for you to read this devoid of any motivational undertone, I don’t like passionate exuberance. I’d like you to evaluate it as hard cold truth; an undeniable fact. In the last article, I argued for us to make peace with the Virus and in this one, I’m trying to, extend that argument further in a more functional way. I offered “questioning everything as the SOP” for creating co-existence with the cruel Corona Virus.

We will have to re-imagine every facet of our life and then reorganize our ways around the new design to survive first and then someday, hope to prosper, again. How should we begin, what should be the sequence of events and where should we stop. Are important questions and conventional wisdom of human existence tells us to adopt. Disclaimer, you may not agree with one or all of these and it is ok to approach it differently: let me reiterate “NOBODY HAS THE BLUEPRINT”. But guess what we do know the common mistakes that we humans have made, let us begin by committing to not repeating them. Let’s talk about the 4 most common errors committed through the course of industrial history.

1) Not asking the right question: If you do not ask the answer is always going to be a NO. Asking the right question is vital because responses are almost always as good as the question. A psychological thought experiment was conducted at Harvard to verify the impact of question on response. In the test, a visual of a car crash was shown to three different sets of people, each was asked the same question but framed differently.
Set 1 – What might be the speed of the cars at the time of contact?
Set 2 – What might be the speed of the car at the time of the collision?
Set 3 – Guess the speed of the car when they smashed into each other, BOOM.
This is how the respondents reacted.
Set 1 – Recorded lowest average speed, in response.
Set 2 – Almost everyone in this group guessed the speed to be higher than Set1. The difference was about 30%.
Set 3– Guessed the highest speed, it was twice as much as the speed that Set 2 had guessed.
You can try this experiment too.
Do you understand the power of the question? When you do ask, make sure that you ask the tough questions and do not mix emotions with your quest. Remember your customers do not pay for how you feel about your business but how they feel. Your emotion must take a back seat. A good question Inspires curiosity, creativity, and deep thinking.
2) Putting tact before strategy: We often pick up our “to do” lists and label them as a strategy. The list populated by most basic and commonsensical items, pristinely presented as ‘end all be all’ response to a situation. The suggested actions have been commonly found to have no root in data or any other kind of qualitative research. People relegate strategy to mere things to do because it makes them feel good, in-charge, and especially because it comes at little cognitive investment. From lack of intellect to absence of awareness/ experience/ exposure to emotional imbalances like fear/anxiety to plain laziness causes one to fall in the trap. The idea is to not stigmatized those who may have got it wrong but to gently steer them to the realization of shortcomings of their approach. To subtly guide them to what may be a more comprehensive thought exercise. If your response to the plan is not answering the below, it is not a strategy yet, you have got work to do.
a) Does it tell you how your identity is going to change?
b) Does it give you a sense of your revised organizational/unit/ goal, objective, and value-based goal?
c) Does it provide for a framework to asses your current offerings?
e) Does it provide the new outline of business as a whole and not ways of doing it?
e) Does it cover existential threats?

3) Putting off tough decisions for the future: We do not enjoy taking tough decisions, so much so that we procrastinate, sometimes even indefinitely. Like closing our eyes does not make the world a dark place it only darkens our vision of it, not attending to a tough situation does not make it go away. You’re better off facing up to it. There is no escape from it. The more you delay the costlier the delay will become. Correcting cost is painful, saying no does not come without heartaches but you gotta do what you gotta do. So get on with it.

4) Resistance to change: This one is lethal and omnipresent, there is not one atom in the universe that can deny its love of inertia; all of us are suffering from it. But not all of us suffer from it in all areas, as long as you do not wish to change your personal life and its settings – it is ok. But if your choices impact others or your organization you have no right to hold ‘change’ hostage. The harsh truth is that if you do not change the market won’t halt its transformation for you to alter your resolve. The world has witnessed mammoths like BlackBerry, Kodak, Nokia, and numerous others that resisted change more than they could afford as a result of being market leaders they became inconsequential, in no time. You have a clear choice in front of you; Would you rather accept to change or let progressive movement in the market force you out of the scene. Considering to change is not when the change actually comes into effect. It is a continuous journey, as a leader you’ll need to support it in an unabated fashion, keep removing bottlenecks, keep encouraging and facilitating change for the larger good. The buck for change stops at you, in simple matters like choosing humble Namaste/ Adab ‘hand-wave of Hi’ over handshake or also in complex affairs like steering the organization out of the COVID19 mess.

Darwinian survival of the fittest is also about the elimination of the weak. Who would you rather be, the strongest or the one that got eliminated?

Pick whichever ideology suits your temperament and appetite but in the end, to remain relevant, you’ll need to ACT.

Linking the first article in this series here: you may wanna check.
Title: CO-EXISTING WITH COVID19!
URL: http://www.lavkush.co.in/2020/05/co-existing-with-the-covid19/