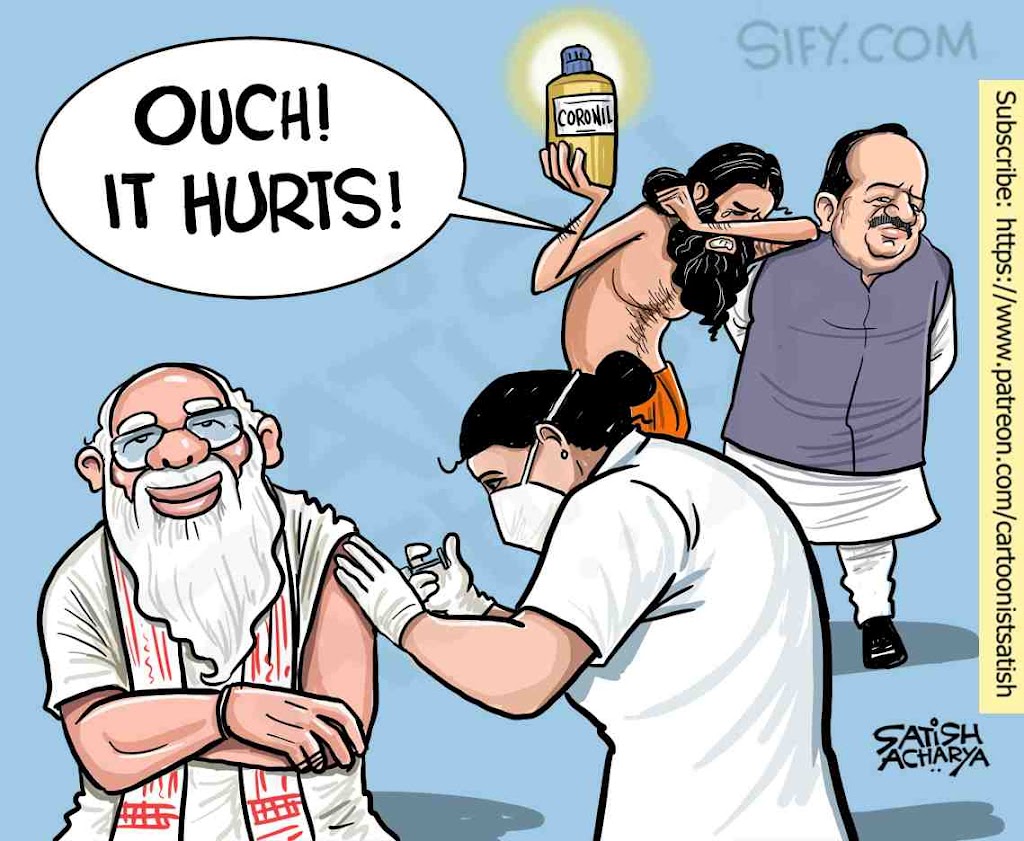 Would Dilip Kumar while filming the song have thought that 51 years later, a relatively unknown, slightly overweight, average looking 36 years old from the cage of his residence in Gurgaon, would borrow from his song to attempt succinctly summarizing the India of 2021? Perhaps, not. And yet, here we are!

Who would have thought that a nation whose founding fathers back in 1947 cobbled 552 princely states, (the balance got included in the Indian republic subsequently) and the provinces under British control together, a landmass which housed not just the most impoverished 31,86,60,000 people (1941 census) but also 1/8th of humanity; masses barely educated, with a literacy rate of just about 12%; would have shown the farsightedness of including ‘scientific temperament’ in its founding document, and yet they did. The first PM of this country and also the one to have got elected the most number of times till date (3 straight terms) made sure that India got premier institutes of science like IITs, AIIMs alongside laying the foundation for reasoned enquiry, data-based decision making and statistical analysis, by instituting various census and surveys as an effective arm of the government. India has achieved quite a bit in the last 74 years, it is a thriving country with an active and alive democracy (though under serious existential threat for the last 7 years) but she could not do enough to rid herself of her ‘unscientific approach’, deep-rooted backwardness and moronic entanglement and fascination with anything resembling ‘spirituality or ancient Indian tradition’.

Needless to say, we are paying a heavy price for it in these pandemic times. Society is naively and naturally falling prey to misguided and downright unlettered suggestions, being made by those in power. Reproducing a few for you here to familiarize you with the degree of the absurdity of these statements from the ruling party of the day.

The theatre of the absurd does not end there. The satellites of supporters orbiting the ‘political narrative’ of the BJP almost involuntarily, have also paid their dues in furthering the cause of utter nonsense’. 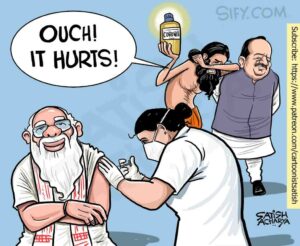 As ludicrous and crackpot as it may sound, in India lead by Fakir Narender Modi (मेरा क्या हैं मैं तो फ़क़ीर हूँ जी झोला उठा के चला जाऊँगा, words of the honourable PM) of 2021, qualified and respected doctors are being forced to defend ‘the science of allopathy and modern medicine’ by arguing with a saffron-clad self-styled Ayurveda and Yoga guru with questionable past, who did not even complete his primary education; in TV studios, at a time when the world is reeling under Pandemic and India has emerged as a hotspot of the world, recording the most number of cases and deaths. What is even more grotesque is the fact that he seems to be winning the battle thus far. Poor doctors, who studied their lungs out, wrote an all India entrance exam, qualified in it, studied medicine for a minimum of 6 years and a max of 15, stand ‘assailable’ in the world of narrative.

You may wonder why I pronounce Baba the winner in the fight, at least thus far? Here is why.

At this point, you might be thinking how do these ‘men of tradition, spirituality and Yoga’ make it so big? To understand it we will need to take a little dip in the history of the nexus between politicians and “Babas and Gurus’.

I have listed three PMs here but if you dig a little you’d find that over 90% of elected CMs too have some or the other affiliations with one or more ‘men of faith’.

The unholy alliance between power, politics and these ‘Godmen’ is not hard to understand, these men have a huge following, running in several lacs. They wield enormous influence over their followers who willingly let these godmen tell them who they should vote for. Politicians naturally have an affinity for these people.

It may be ill-omened that the Government led by PM Modi allows flimflammers like Ramdev to defame the authentic and scientific line of treatment and even speak disloyally of the effectiveness of vaccines when seen from the vantage point of governance and public health and safety but we will need to concede that its political dividends are enormous. And perhaps that is why, he is allowed to rage and rave, as he wishes. The monk who can buy a Ferrari and much else said and I quote, “What can the doctors do, they could not save themselves,1000 of them died despite taking double doses of the vaccine”. Would such a comment not add to already grave vaccine hesitancy in the hinterland of India, you be the judge of that. The government chooses to not intervene with the penal action, no prizes for guessing why.

Politics is a field in which genius moves are often cacodemonic in character. I would like to call your attention to the brilliance of the timing of Ramdev’s attack which is no less crafty,  in the unit of malevolence with which politics measures itself. You might wonder why am I saying such a thing? Let me uncover the bigger act in play here for you.

The peak at least in official numbers for the 2nd Covid-19 wave seems to have passed now in India, with daily caseload reduced to nearly ½ of what it used to be at the peak a few weeks ago. The public attention had started shifting from delinquencies in the cure (Oxygen, beds, ventilator, meds and medical staff) to deficiencies in prevention (vaccine). The number one conversation currently running on the minds of people is vaccines or lack of it. People have understood, by and large, that there is no alternative to getting inoculated when it comes to meeting the challenge that the virus and its many variants in circulation pose. PM Modi’s preoccupation with elections, disdain for the advice of the scientific community, contempt for knowledge and ill-informed bravado came in the way of his administration procuring the number of doses needed to protect the Indian people. As a result, India is experiencing a vaccine drought, of sorts. The mammoth gap between supply and demand, as can be seen in the attached numbers which are a testimony to dwindling rate of vaccination in India. 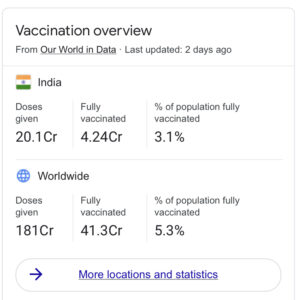 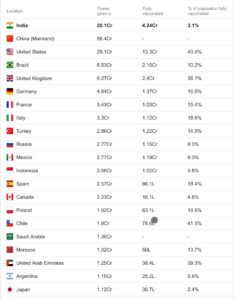 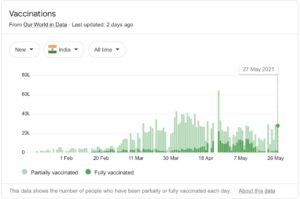 The administration leaves a lot to be desired for and it does not want the public to understand, acknowledge and discuss its many failures. If there is one thing that PM Modi is concerned about then it is his own image. Recently, BJP’s president joined PM Modi and RSS members to brainstorm ways of recovering from the dent in the image of his leadership, the performance of his government and particularly the mess in UP. The meeting ended with BJP National president, Nadda making a public appeal to the party workers and elected representatives to become ‘more visible’. They understand that the truth is out there and people are taking note of it.

The government desperately wants the nation to look the other way, so it in its masterstroke has expertly manufactured a number of controversies to completely hog the headlines of the newspapers, discussions in prime time and by extension the attention of the people.

The BJP knows that when these measures are announced there is going to be a widespread protest, noise and chaos. It not only understands and estimates but also anticipates groundswell in opposition to these measures, coming from all directions – and that is exactly what it wants. So that the nation does not find time and attention to focus on the sparsity of vaccines, hiding of deaths and massive undercounting of infections, prominently. With the mess hidden those responsible for it will also get an opportunity to distance themselves from it.

Like it or not, it is indeed a political masterstroke.

Fight with the Social Media companies, Socio-political disturbances in Lakshadweep and Baba Ramdev’s deplorable, injudicious and irresponsible remarks together provide the best cover that PM Modi and his associates can ask for and create at this point in time. They have succeeded thus far in shaping the national narrative. Whether they continue to march ahead unchallenged and undefeated in the future or not, will depend on how much attention we the people give to what issue? People will need to decide to not get distracted from the number one issue of the day, which is ‘vaccination of a billion people’- nothing that they throw our way will break our resolve.

We got to use the currency of our attention, judiciously.

Let’s unite in demanding accountability for mismanagement of the pandemic and above all for the quickest possible vaccination for all, not just those who can afford to buy their way out of the pandemic.

Till then take care, goodbye!