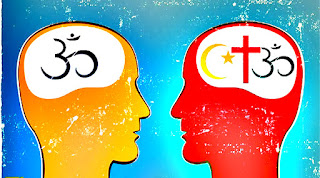 “मैं  सबसे अच्छा हिंदू हूँ “, asserted a man who was buying earthen pots and diyas (traditional lamps) to decorate his home on the evening of Ram Janambhumi temple bhumi pujan from a poor seller toiling hard to make the ends meet for his family, under a tree on a dusty city road, rattled by irritably honking motor vehicles. The poor seller is groggy, not very well educated but has the wisdom to analyse what he just heard, before accepting it to be the ultimate truth. He mutters to himself quietly “when did being a Hindu become a competition”? He labours to hide the expression of astonishment on his face because he knows so much as a sign of disagreement with his well-fed, pot-bellied, ill-mannered, and arrogant customer would most certainly mean loss of sale and perhaps even he could be forced to vacate the 2 feet area that he occupies to spread his shop. So, he hides his disagreement behind the dual cover of dutiful nod and a broad helpless smile. He packs the purchase neatly in a newspaper that he bought earlier in the week and hands it over to the buyer, to cement his relationship with the ‘best Hindu’, he tries to fill as much pride as he possibly can in the “जय श्री राम”, for a parting greeting!

One of the holy books of Hindusim, Ramayan, decribes RamRajya, in the following verse.

Lord Rama, specifies “स्वधर्म” and talks about a social struture in which no one, has any pain (Physical, economic, spritual, worldley or otherwise). He also, says that one practices their belife at a personal level ; rulling out the case for a competitive display of ‘faith’.

In the know of how Lord Rama envisioned the ideal society; let us try and analyse, this situation briefly.

The seller was not as Hindu as he was hungry, not as Muslim as he was weak, not as Christian as he was hopeless about his future, not as Sikh as he was in pain. He did not express himself, he accepted the payment thanked the buyer to conclude the episode. Who was the thinking seller; we will never know. But he represents, a vast majority of this country, that is both socially and economically oppressed so much so that they think they do not have a political choice either. This group of people can afford to engage in just one fight at a time, so they give every other struggle a pass because poverty almost always holds every ounce of their existence hostage.  The social and political discourse of the day is unfortunately not about him (or shall we say them) but the other lad, for whom, being a Hindu does not come without the obsessive compulsion of asserting that identity, which is not so much religious as it is political but he does not have either the sense, the education or the curiosity to make such a thoughtful distinction. He goes around exerting his beliefs as aggressively and as passionately as humanly possible for him. For him, faith is not a private matter; he is not content in himself unless he measures himself against others he does not feel the sense of fulfilment.

It is safe to assume that this assertive kind of Hindu has not read the Shrimad Bhagwat Geeta, and therefore not in the know that religion is not something to be made a show of, therefore, he goes all out.

He (the buyer) is a brand of Hindu, for whom, unison with God in the serene hours of the dawn making silent prayer the medium is not religious enough; he gets a high when he gets to parade with others like him on the streets shouting ‘Jai Shri Ram’ out loud. As if the lord is hard on hearing. He surely hasn’t read.

He feels alive when he identifies the ‘other‘, in his illiterate notion, service to God is in hurling insults towards those unlike him and on occasions he does not even hesitate from physically violating their freedom. Extremes of these affirmations end in merciless crimes too, this nation has not forgotten the horror of beef lynching, its victims and other innocents who were killed in various communal tensions that have stained, the constitutional republic of India, perhaps forever.

This Hindu finds solace in the company of fringe and strength in hateful utterances of the political leaders. He believes, he is being like his PM when he marks people with their clothes (remember, the speech that Narendra made, in which he said that those who create disturbances can be identified with their clothes”). And he is not entirely wrong in making that assumption, what else is a common man supposed to draw from the image of a union minister garlanding an accused released on bail from charges of lynching Aklaqh khan. He believes strongly in the power of symbols, puts a large Tilak on his forehead, wraps saffron with pride and wonders around teaching people the history that he learns from his Whatsapp. He thinks his religion is in danger and is willing to sacrifice everything to save his ‘Dharma’. He does not know the concept of Dharma or understand its meaning, let alone its practices and implication on the societal structure.

He has been made to belive with constant reinforcement that his acts are for the benefits of his religion first and for the welfare of his country at large. He has absolutely no idea that he is not becoming a saint by practising this kind of toxic routine, instead, he has been converted into a political worrier, armed with hate and intolerance. When he waves a gun at people peacefully protesting against the decision of the government, that he believes is working for the same faith like his, in his mind, he is pulling a modern Bhagat Singh. He does not believe that his bullet, if and when fired, will hurt and kill another India, but an anti-national, who has no right to be in this country. He thinks his extreme hate for the ‘other’; makes him a purist, an nationalist. He finds comfort in the hate-mongering MOS of finance (देश के गद्दारों को, गोली मारो…को), venomous saffron-clad chief minister’s obnoxious utterances and terror accused lady member of parliament who openly celebrates the killing of Bapu and hails his murderer.  He thinks that he can’t be punished for being a true Hindu nationalist.

Let’s take a step back, a reflective pause to think if he is entirely wrong? If recent developments are anything to go by, you can say that he may be unwise but not entirely delusional.

He knows it very well that a grand Ram temple will be erected before the next general election. He knows that those responsible for the demolition of the mosque, an act outlined as criminal by the Supreme Court, are the very people, who are in charge of building the temple; so by extension, if he also crosses a line or two in the expression of his love for the Hindu Dharma, he would have the full protection of the state as well.

Millions of people welcomed the Bhumi Pujan, as they should – Lord Rama, is indeed revered and who in the right mind would oppose building up of a temple at his birthplace; a fact registered in epics and folklore for thousands of year, and now even has the seal of the highest court of the land. The construction is perfectly legal. The debate, unfortunately, does not end there, though. Such overwhelming sponsorship and exuberant participation of the Indian state in religious activity, the Indian PM inaugurating the ceremony; is where the question of constitutional morality, secular character of the nation and political impropriety comes in. But before we quote the conduct of democrat, par excellence Jawaharlal Nehru, the then PM of India, who did not participate in the Somenath Temple, to preserve his righteousness as the head of a secular state. He did not stop there, he also took exception of the then President Dr Rajendra Prasad’s desire to be a part of the celebration; to say that Mr Modi’s conduct was not Prime ministerial, we should examine the below facts too.

+ BJP under the leadership of Narender has won a full majority in a ‘free and fair’ election, for the 2nd time in a row; so they are indeed the bearers of the will of the people.

+ BJP and the RSS, have been unapologetic in their public position with respect to building the temple or other contentious issues like Article 370, Uniform Civil code, Citizenship amendment bill etc.

+ PM Modi, is also a citizen his right to religion is guaranteed by the same constitution that gives us our rights.

+BJP is a political outfit and as the way of the world in politics goes, creating and swinging public opinion is what their core job is and they are going about it well.

So where, does that leave us – the common voiceless and faceless citizens?

“Hindu – Hindi – Hindustan” is the slogan that PM and his party swear by, secularism, plurality and unity in diversity is not how they describe India in their Idea of her.

The choices now will have to be made by us, the people!

Do we wish to remain secular and prosper the way most of the western world has or do we relegate into becoming a theocratic state, like our neighbour (Pakistan) and descent into chaos of extremism that the idea of a nation based on religion brings with itself? At this point, it is vital to understand that only 32% of Indians voted for the agenda that Narendra and Amit wish to operationalise; twice as many Indians do not approve of it. But to make any substantial difference on the ground, ordinary voters will have to unite and vote for their idea of India, one which had the blessing of the great Mahatma, a Gujarati, every Indian is proud of.

संघे शक्ति कलियुगे
भावार्थ: कलियुग में संगठन शक्ति ही प्रधान है
So, when the opportunity presents itself, DO VOTE and VOTE FOR AN INCLUSIVE INDIA.
Till then, राम राम।